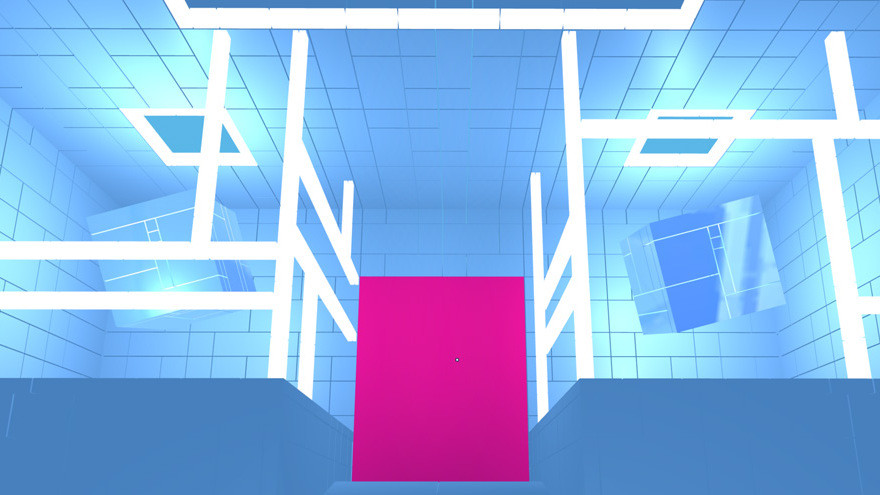 No videogame is perfect. Somewhere lurking in the seams of polygonal landscapes lives the glitch —a graphical hiccup that could lead to characters not loading properly, items malfunctioning, or walls losing their solid form. However, in recent years the glitch has transcended its status as a technical bug to become a populist generative art tool. For example, Assassin’s Creed Unity’s (2014) walking nightmares wouldn’t have existed without errors to prompt them. Someone found an exploit in Dark Souls (2011) that lets you skip most of the game and break speedrun records. And even older videogames have found new life through gorgeous glitches that resituate retro charm for new audiences. In fact, glitches have become so popular that games like Memory of a Broken Dimension have adopted glitch aesthetics whole cloth and applied them to environments meant to bewilder players with intentionally fractured spaces. Unlike glitch aesthetics, real glitches are signifiers that something is broken or incomplete in a system’s programming. So while sometimes players might think glitches look funny or beautiful, they can be real headaches for game makers.

In the new game Glitchspace from Dundee-based studio Space Budgie, it’s your job to relieve those headaches—you’re a glitch repairperson. You walk around on white floating cube islands, clicking on red blocks to alter their code, reshaping them, moving them, or changing their function to build pathways and unblock passages to get from point A to B. It’s not a glamorous job and Glitchspace is not a glamorous game. For better or worse, there are almost no notable glitches or glitch aesthetics to gawk at. There’s no story setup or pretense to imply motivation for your role either; fixing is what you’re there to do, and that is all.

If you’re like me and have very little experience with writing code, Glitchspace is all on-the-job training. Say you come to a dead end, but when you look up some five stories high, there’s an opening. It’s the only way forward and your meager jumping abilities won’t get you anywhere close. Luckily the floor is a red block, which means you can manipulate it. When you right-click on a red block, a two-dimensional word-web interface pops up, allowing you to summon and connect nodes that change the function of the blocks. In this case, you could pull in an “Apply Force” node (more bouncy castle than Jedi), along with a few others to register the proper syntax, and assuming you set the numbers high enough, the red block will spring you up to the opening in the wall. What was once broken has now been fixed.

In concept, Glitchspace has a lot in common with music puzzler FRACT OSC (2014). Both games situate you in an abstract world within a computerized machine, and both have at least a partial goal of sparking real world interest in its subject matter beyond the game. In Glitchspace, that’s writing code. In FRACT it’s creating synthesizer music. However, where FRACT’s puzzle design had little to do with actually teaching players how to make music, I left Glitchspace knowing a smidgen more about programming than when I entered. Granted, most of what you can do in Glitchspace stays within the realm of basic circuitry (flip this switch to send electricity to the light bulb kind of stuff), but seeing the real language and making those connections by hand is more powerful and convincing than simply reading them or having an implied understanding.

I left Glitchspace knowing a smidgen more about programming

But even as a learning environment, Glitchspace has its limits. It offers an experiential learning half step; providing hands-on activities, but little in the way of self-directed exploration. Though a sandbox level creation mode is planned, it’s not present at launch, which leaves the “Story” mode surprisingly lacking in playfulness. It doesn’t help that the design of Glitchspace’s world is bare bones and uninspiring (think Portal with placeholder assets). You’ll spend the majority of your time in Glitchspace traversing white tiled walls and floors, hacking into red rectangles, and spawning grey fodder cubes. There’s something very “corporate training session” to the whole endeavor that made me want to get most puzzles over with as soon as I could.

Glitchspace’s claim to fame is its node interface, which is notably accessible for coding novices, but gives way to encumbrance and tedium by the end. Once I got the hang of moving the red blocks around on various axes, I felt empowered to take on whatever challenge the game threw at me next. I’d simply eyeball which point in the grid the block needed to be moved and plugged in the corresponding components. Easy enough. But when you don’t know exactly which nodes to implement to, say, repurpose one block as button that turns another invisible, the trial and error becomes an embedded menu hunt for whichever nodes are even compatible with one another. Not to mention that I still don’t know why nodes like “Rotate” show up in multiple places but seem to have different uses. There’s elegance and satisfaction to executing simple manipulations that gets lost in translation as more complex logic systems are introduced.

There is a sweet spot around the midpoint of Glitchspace after you learn “Apply Force” and you get a string of puzzles that do allow you to play around a bit—it helps when you can fling yourself around like a ping-pong ball. But the endgame puzzles come with red cubes that are preloaded with so much node-clutter, I found myself looking for glitches just to get around it all. It’s one thing to allow for multiple solutions for puzzles, but another to imply that there’s a right answer and let players sneak by with some other answer that probably wasn’t supposed to work. I went from being a glitch repairperson to leaving horrible messes of rubberized cubes at 20-degree angles in my wake, simply doing whatever I could to get to pass the test with no concern for the theoretical next player.

I started out by saying in Glitchspace you’re a glitch repairperson, but that role is less a character to embody than simply a list of tasks. A couple hours into Glitchspace, I hoped for a break in the progression and the chance to explore my newly acquired skills, but instead the complexity is continuously layered on top of itself until the game ends. And it ends with you literally walking back up to the title screen, ready to clock in for another shift. I think I’ll take my lunch break instead.