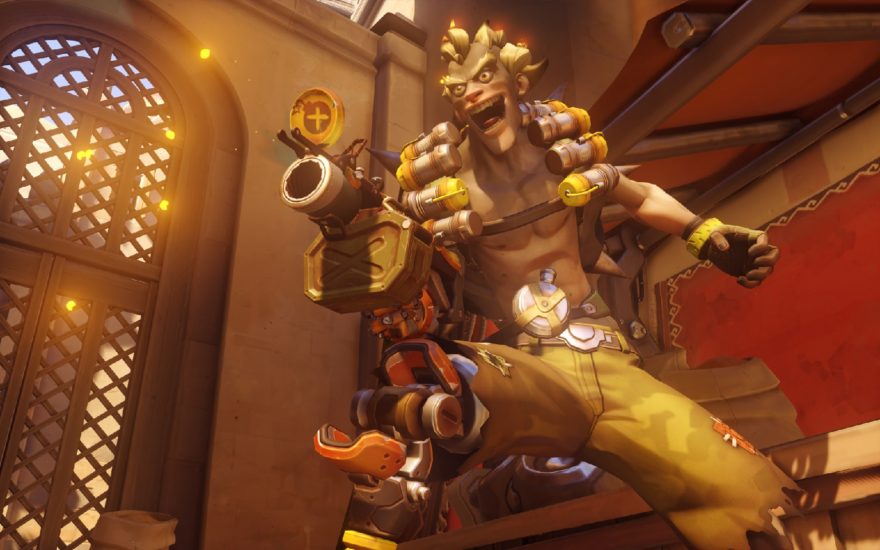 I’ve been waiting my whole life to meet Junkrat. As with any great love, it began at first sight. “Who is this?” I thought, my cursor lingering for a second longer on the Australian pyromaniac, a couple hours into my first night playing Overwatch. I was still cycling through different heroes and playstyles, and perhaps I didn’t tarry long. But I remember saying out loud, as I slipped into Junkrat’s skin for a couple rounds, “Oh, this is nice.” His rhythms felt alien but familiar; his quintet of skills all immediately understandable. By the end of the weekend, those skills were hardwired into my head, and I was finding weird new combinations of them. I’d sunk something like two hours into Bastion the first night—I doubled that with Junkrat the next day, and again the day after that, and haven’t looked back since.

He was the character I was already searching for. Overwatch is, on first impression, overwhelmingly hospitable, and I was sold on finding a character who would feel the least like all the other shooters I’ve played and discarded over the past few years. I have spent far too many hours watching sniper bullets soar past the heads of my foes, or circling round a corner only to unload six rounds at an unsuspecting opponent who then turns around and kills me with one. And so, if a game is to allow me to impact it without such repeated reminders of my incompetent aiming, I will take it—I will take it and I will run with it, cackling.

Junkrat, at last, rewards this cowardice

But even if Overwatch is generous when it comes to accommodating different playstyles—catch me stutter-stepping as Reinhardt twice per weeknight—Junkrat feels as if drawn from the white noise of my mind. I’m reminded of that climactic scene in Ratatouille (2007), in which the famously hard-to-please critic Anton Ego takes a bite of the protagonist’s titular dish, and is instantly transported back to the simple sophistication of his mother’s cooking. Because there is no shooter I have spent more time playing, or loving, than Halo, beating its various campaigns dozens of times, but always being willing to hang back, lob grenades, carry the party’s position slowly forward as my teammates respawn repeatedly. I’ll call out the Elite making its way over the east-side hill, the new dropship requiring us to fall back. Junkrat sets this in context. I am a videogame conservative. I want to play a videogame, but good lord, I do not want to be shot at. I do not want to die. I used to run away from the action in Battlefield games, so I could better observe the beams of light and play of water across the beach.

Junkrat, at last, rewards this cowardice. I’ll sprint to the opponent’s side before a match starts, giddily lay a few traps, and then haul ass, tittering back to safety. In the event that I do die, I’ll take the long way back to the battle—has any shooter’s level design ever packed such rewards into that decision?—and then, from the safety of an overhang, mete out my revenge. The moments of chaos created by a well-executed Junkrat maneuver are truly spectacular: the concussion mine that sends a wall-gliding Lucio soaring to his death; the two clips of grenades unloaded into an enemy team before they realize where the hell you’re hiding; the rip-tire clambering over a just-tall-enough wall and right into a thicket of enemies, allowing your team to take back the point.

Even the less savory aspects of Junkrat’s personal brand have wormed their way into my heart. Overwatch’s cast has been rightly celebrated for its diversity, and its art direction should be praised for finding cohesion among so many disparate styles, but Junkrat’s Batman-villain malevolence is perhaps the most far afield from anyone (outside of D. Va, who was transported in from an anime spinoff). I will admit that “guy who loves to blow shit up” is not an inherently rich vein of comedy to me, but hearing him grouse about how much he hates certain levels and then being incentivized to blow those levels to shit is just the sort of ludonarrative consonance we don’t celebrate enough. Overwatch is lousy with these details—not lore but character, even mechanical, physical character, narratives written in real-time with each new match.

And so celebrate I will. I will straight-up snake Junkrat at character-select in competitive play from you and I will not give him back if I underperform. I will play Junkrat in Nepal just for the three times per round I can blast someone into the pit. I have lived my whole life for that moment. I will spray his stupid face on the heavens. I will repeat his catchphrases in real life. I will play Junkrat until, as with any great love, it calcifies, and I grow bored, and eye those other heroes lustily—until I sheepishly sneak in a match or two with Bastion, just to see how something new feels, to remember what it once felt like to be with someone else.

And then I will return. Junkrat forever.

Bastion – Bastion is the machine pointed at the world
Hanzo – Hanzo “looks like a good man,” my Japanese mom raves
Mei – Here comes Mei, the badass nerd hell-bent on revenge
Torbjörn – An ode to hard-working, salt-of-the-earth Torbjörn
Widowmaker – Widowmaker made a widow of me